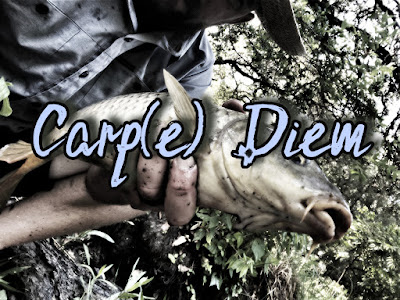 As cliché as the title of this article is.  It is still appropriate.

I set out in the morning to fish a small creek near the Mexican boarder, armed with only a 3 weight rod and the hopes to catch some Rio Grande Cichlids for the Year of the Rio.  It rained hard the night before.  The caliche roads were sticky, covering my tires, wheel wells, and the soles of my shoes, as I trekked down to the creek.  I got off the roads and hiked onto the trails that led me to the water, the mud turning from white to black.

Seeing how much it had rained the night before, I was beginning worry that the creek would be flowing fast and muddy, not ideal for what I wanted to go catch, and when I caught my first glimpse of the water, my suspicions were confirmed.  "Oh well, I'm already here, I'm gonna give it a shot anyway."

Las Moras Creek is normally a "cold" 68 degrees (bubbling up from springs in the far western reaches of the Edwards Aquifer), always narrow, shallow in most places, and covered on all banks by overhanging trees.  Casting is tough.  Today was even tougher.  Wading in water with a mixture of rocks, mud, fallen limbs, and zero visibility can be risky.

I fished hard for a while.  Casting as tight as I could to any area that looked like it provided reprieve from the fast flowing water, was possible cover, or where the fish might be tucked up under the bank.  I never found so much as a nibble.  Not even the kids with worms were catching anything.  But, I kept moving, casting, hoping.

The day was seemingly going to be a bust.  All my fishing plans have been recently.  The busier life gets and the fewer opportunities you have to fish, the more often those rare fishing trips seem to be less than ideal...but such is life, right?

I turned a bend slowly, and suddenly saw a tail sticking out of the water.  I couldn't see any of the fish, other than the tip of the tail sticking up.  I'm not kidding when I say that the visibility was probably less than an inch.

I carefully negotiated my way to where I could make a cast in front of the fish, landing my Modified Rio Getter to about 8 inches in front of where I thought the nose of the fish might be.  I saw the tail move forward, and wham, it was on.  The fish took off, quickly started to pull drag (set loose to protect my light tippet), and seemed to be searching for cover.  As strong as the fish was for my 3wt, I landed it fairly quickly, snapped a couple pictures, and quickly released it back to the water.

I now knew that it would be tough, but my best shot at catching fish was going to be stalking the tails of carp.  So that's what I did!

I never planned on chasing carp, but if it wasn't for these tailing common carp, I would have been handed a big ole skunk.  Carpe Diem, seize the day.

To Learn More About Fly Fishing for Carp: Carp In Texas