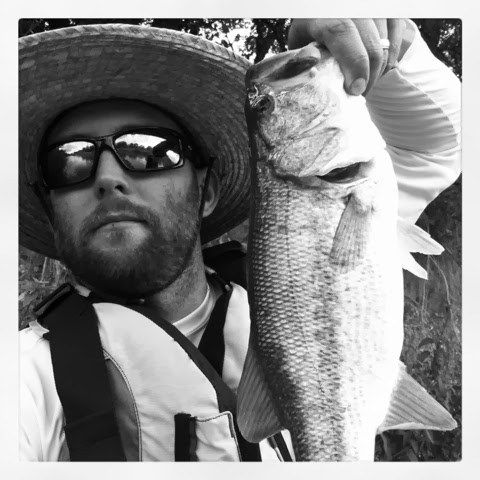 I felt it necessary to post about fly fishing the South Llano River, the river I have fly fished more than any other.  I used to reside there in Junction, TX, and spend most of my free time kayak fishing the river here in town.  I also used to guide clients on kayak fishing trips down the river.  Hopefully this info can help you out.

The South Llano River is an excellent fishery, especially for the fly angler.  The river teems with multiple species of sunfish, including the fabled Guadalupe Bass, catfish, and other exciting catches.  There are also float trips you can take that range from full day excursions to just an hour or so on the water.

Here is a quick rundown of a few of the fish you might hook into on the river, and the flies that I would suggest to fish for them with.

Largemouth Bass
Though not as famous on this river as the Guadalupe Bass, the largemouth fishing on the South Llano River is still good.  The largemouth might jot be huge, but they are river fish, and are guaranteed to put a good tug on the end of your fly line.

Fish for them in the river grasses, and the slower moving portions of the river.  Poppers, streamers, and crayfish imitators will all catch largemouth.  I would toss darker colored flies with chartreuse accents right now.  Here are a few of my favorite flies for largemouth bass on the South Llano River: 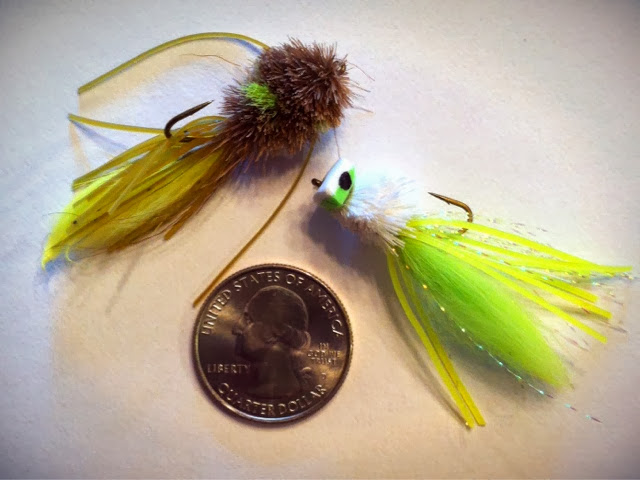 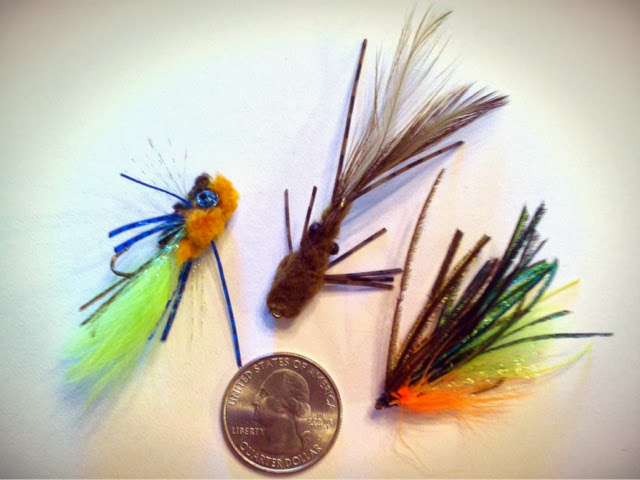 Guadalupe Bass
The South Llano River is the best pure strain Guadalupe Bass fishery in the world, thanks in large part to the work of Texas Tech University.  These are also my favorite fish to catch on the river.

The Guadalupe Bass is sometimes referred to as the "Texas Trout" due to its propensity to take a fly.  They feed on crayfish, baitfish and small sunfish, and insects.  I prefer brighter colored flies for Guadalupe Bass, but will mix it up depending on the conditions.   If I am throwing a surface fly, I usually want something very buggy. Here are my favorite flies to catch Guadalupe Bass: 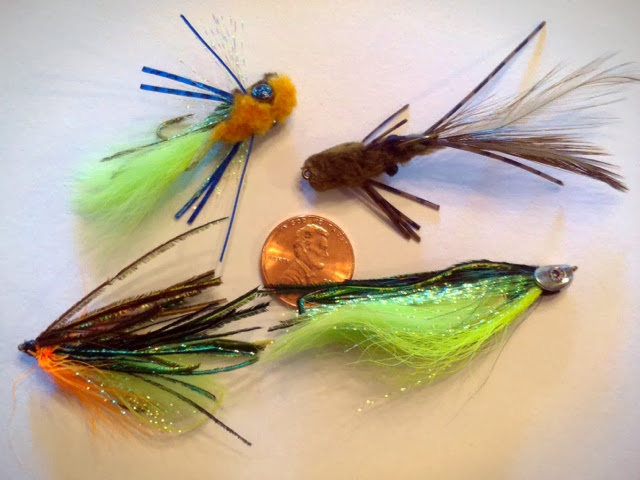 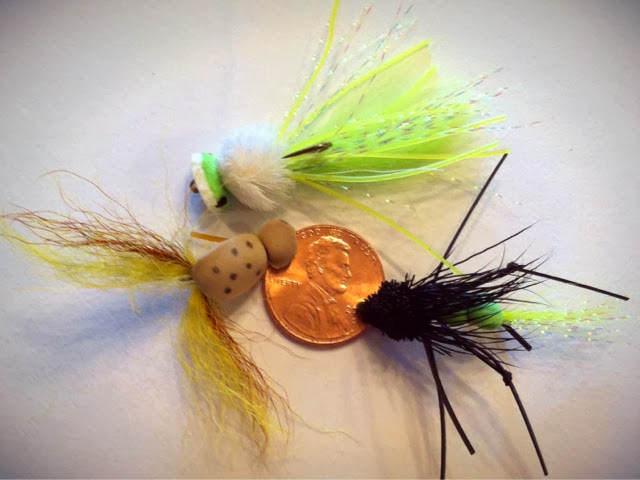 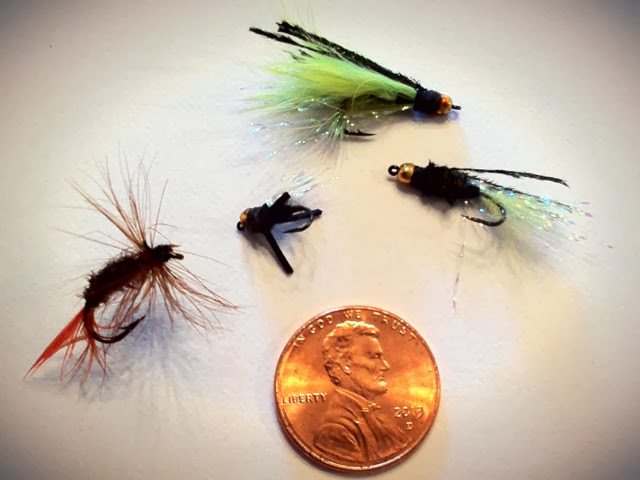 Yes, I know, both the Largemouth Bass and the Guadalupe Bass are members of the sunfish family, but I am talking about the other ones that swim in the South Llano River here.   There are multiple species, and several hybrids, that you can catch on any given day.  Some will be small, but some will grow as big as you hand.

These are excellent fighting fish, and can be caught in good numbers.  They are also delicious.  Catch mess of these guys, and you won't be disappointed.  Small is the way to go when choosing flies for sunfish.  I typically fish surface flies slow and streamers or other subsurface flies quickly when I am targeting sunnies.  Here are a few of my favorite Sunfish flies on the South Llano River: 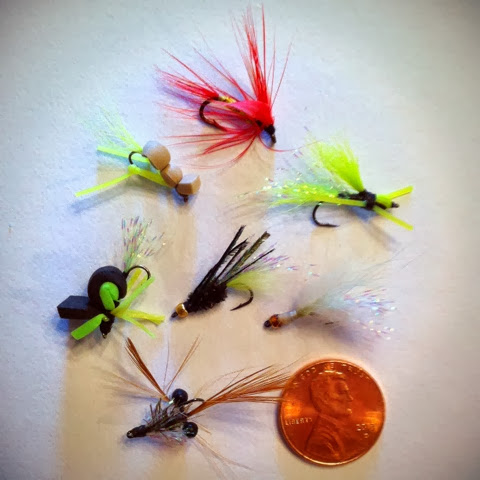 Catfish
Believe it or not, catching a catfish on the flie in the South Llano River is not an uncommon occurrence.  They are surprise when they hit, and often fight the hardest of any fish on the river.

I usually catch catfish by accident, while targeting other species, but you can do things to increase your chances.  If I am wanting to catch a catfish, I will fish one of two places.  1) Along deep shaded banks, or 2) in the moving water at the back end or just behind a set of rapids.

Hellgrammite imitators, drifted along in the moving water behind rapids is the best way, but they can also be caught on surface flies (especially hoppers) in late summer and early fall.  Here are a few of my best catfish catchers: 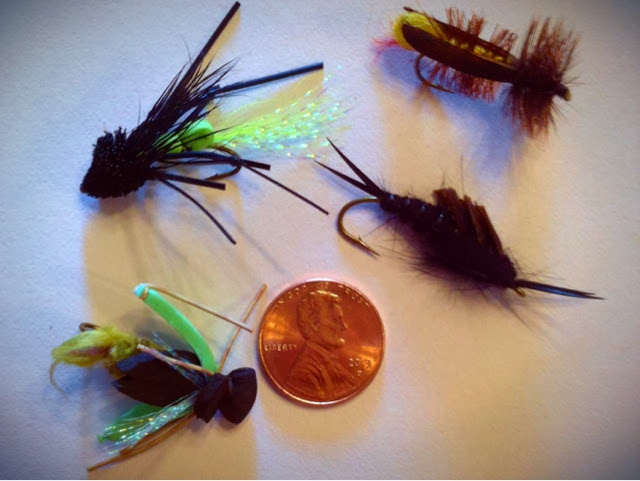 Other
Other fish in the river include Gar and Carp.  Both are difficult to catch, but can be a blast when hooked.

For carp, I will stalk them slowly upstream with a tiny fly.  They are often found in the moving shallow water, and tend to be very skidish.  Say downstream from them, as they tend to have their heads upstream.  Watch for moving fish in the shallow water.  Put your cast right in front of their nose and be ready!

Gar, are usually found in the middle of the deeper, slower moving pools of water.  Keep your eyes open for them as well, as they will come up to the surface in the afternoon.  I use sunfish colored flies with very thin wire hooks to catch Gar in the South Llano.  The thin wire hooks mean that you need to use caution when bringing them in, but penetrate the Gar's hard mouth much better.
Catfish Guadalupe Bass Largemouth Bass Rio Grande Cichlid South Llano River Sunfish

Yep, it is that time of year again (love it or hate it.) Texas Parks and Wildlife released their Winter 2022/2023 Trout Stocking Schedule.  All together, they are planning to release 337,169 trout in Texas' waters.   They might not be the ultimate in fly fishing opportunities for many of y'all, but they can be a great way to get young kids into fishing.  (If you are planning on fly fishing for these, here are the flies that I would suggest: Flies for the Guadalupe River ) So, here are the important links to your 2022/2023 Trout Stocking schedule: 2021/2022 TPWD Trout Stocking Schedule TPWD Rainbow Trout Stocking Map Directions to Stocking Sites Peace Out-side, Y'all Do you enjoy Texas Freshwater Fly Fishing?  If so, you can support TFFF by making purchases at Flydrology.com  Your support helps keep Texas Freshwater Fly Fishing up and running, with quality content and a great Facebook group! Other articles you will LOVE: Flies for the Guadalupe River Five Must Have Flies For