Two Flies and an Old Stretch of River 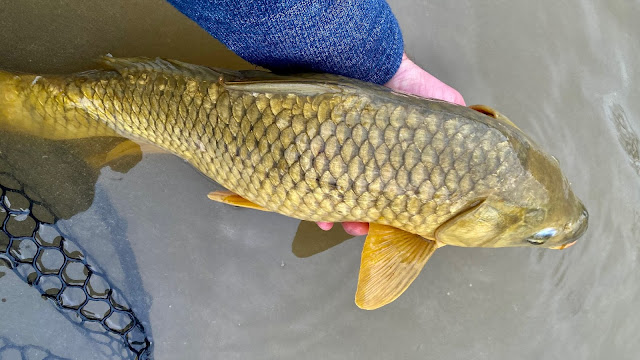 With time changing the night before, it was still dark when I stepped out of my truck. I really hadn't fished here in years, many years, but I still felt like I knew my way around the river.  This was my river, heck, every river is my river when I am on it.

I pulled up to pay my park fee at 7:00 am.  Getting there early was not an issue, as I am an early-riser on days I don't go fishing.  Eagerly, and faster than I should, I continued the drive from the booth down to the parking area for the river.  I was the first and only vehicle in the lot.

Having packed and prepped the night before, I grabbed my 5-weight, my backpack stuffed with flies and food, and I took the long walk (more like speed-walk or almost-jog, or who am I kidding, I pretty much ran) down to the water.

Upon reaching the river, I took my first cast before the sun could even cast a shadow.  I had fished here many times, but many years ago.  It had been my White Bass kingdom this time of year, years ago, sometimes landing over 100 in a day.  I wondered if it still was.  Not having a clue about this stretch of water anymore, and with slight hopes of catching a mess of whites, I had my SMP fly tied on.  I cast, varying the retrieve, and walked.  Then cast, and waded, and cast again.  I covered water and worked my way downstream.  Nothing but the sound of my fly line and footsteps.

A light drizzle started to fall.  I began to see disturbances in the water, what I knew had to be spooked carp.  Then, suddenly the silence was broken.  Turkey gobbles.  Then the hammering of a woodpecker, probably a Golden Fronted woodpecker I assumed.  But, the world was coming alive.  Light was reaching the water and the silence was no more. 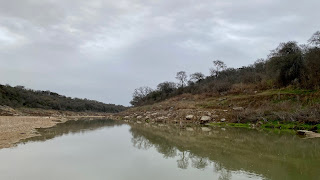 I kept casting, moving, and casting some more.  I was beginning to see that there were no white bass in this stretch of the Pedernales this year. The water was too low, the "rapids" too shallow.  Suddenly, a bump, and I had the first fish of the day on my hook!  "Whoooo, no skunk," I thought to myself.  Then I saw it...dam, nothing to get excited about.  This Guad was no Guadzilla, if you know what I mean. He was almost as small as my fly.  Oh well.  Better than nothin'. 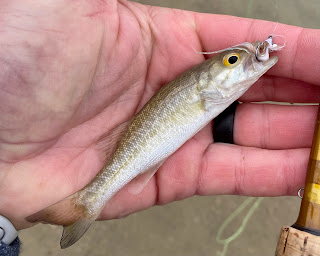 I kept moving, kept fishing the SMP.  Then landed three small sunfish, two bluegill and a small green sunfish.  The SMP was catching what it was intended to catch. 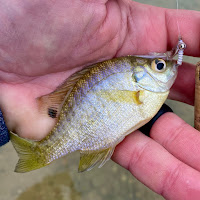 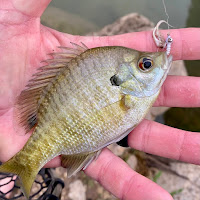 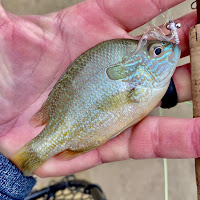 Fast, long strips were the trigger, and soon I landed two more small Guadalupe Bass.  Then another Guad, but this one was a little bigger.  Alright!  Quickly, I released my catch and made another cast to the opposite bank, between a rock and a stump.  Beautiful cast!  First strip of my line and bam!  This one was big! 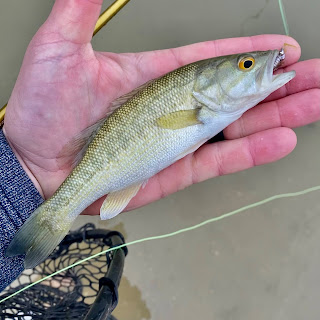 Nope...well, yep...it was big.  Big-ole' tree root or something.  I struggled for a minute trying to free my fly, but it was a futile effort.  The tippet broke and I had a decision to make.

I was just at the bottom of this hole, approaching a new stretch that looked a little different, so I decided to change up flies.  I wanted to go bigger, in hopes of catching bigger.  I selected my favorite creation, the Crawfish Bite.

I made a couple casts, now slowing down the retrieve, in order to scuttle the fly along the bottom. Near another broken stump, I let the fly sink, made two short, quick strips of the line, and waited.  Bam!  Another big hit near a stump.  It was probably another big tree root or something.

Zzzzzzzzz...the drag ripped.  Nope, not a tree this time.  This was a fish.  The fight was slow, steady, and heavy, but I eventually got it in close enough to see the golden flash of a carp.  Another minute or two and I had the fish in my net.  It was a nice sized carp, and my first quality sized fish of the day.  It was also my first carp in the Pedernales River. 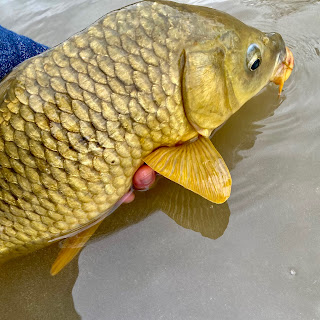 Removed the fly, released the fish, and restarted casting.  I couple casts later, and I had landed another fish on the Crawfish Bite.  This one being another river first for me.  Heck, it was a first on a fly rod for me.  It was a fish that I didn't even know existed in the Pedernales, a White Crappie. 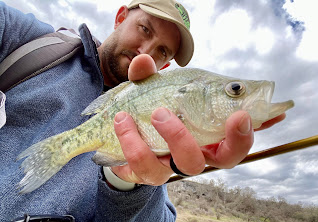 Continuing to fish my Crawfish Bite, I worked my way further downstream for a couple minutes before wham...another good bite.  This one having the unmistakable fight of a bass, I was quickly proven right when it proceeded to make several leaps out of the water.  A quality river Largemouth Bass checked off the list, and that totaled six species of fish caught on two different fly patterns.  A real mixed bag of a day. 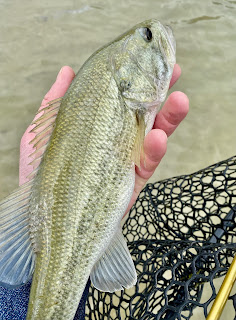 I had reached the end of the stretch I wanted to fish and glanced at my watch.  Noon already!  I'd been fishing for five hours and the only interaction I had with people was the helicopter that decided to wiggle as it buzzed me while flying down the river canyon.  So low in fact, that I could clearly see the people inside waving at me.  It was time to start working back upstream.

By this time, the wind had picked up making it impossible to fish at times...so I walked, only casting when the wind laid down to a strong breeze.  There were a few people hiking up above me, so I knew the park was filing up.  I kept walking, casting, and landed a couple more sunfish and small bass.  Nothing different, and nothing to brag about.

I eventually ran into another fly fisherman and we had a small conversation.  He had only landed one small bass.  I hope he caught more after I left him.  I turned a bend in the river, and the banks had filled with people.  Some fishing, some chillin', some playing with babies or dogs.  But I was done.

I trekked back up the long, steep hill to my truck, much slower than I had come down, but got in as fast as I had gotten out.  Satisfied, my day fishing was complete and I was heading home.