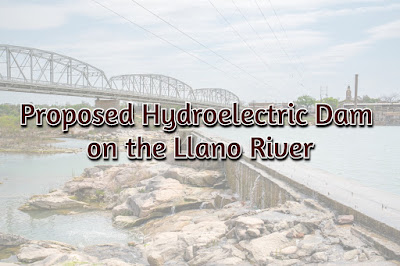 On June 18th, the Lower Colorado River Authority (LCRA) has filed a Motion to Intervene and Protest with the FERC.

They have cited the following as their rezoning's to protest:

In response to that protest, Nelson Energy responded saying that, "the facility can be created as a closed loop project which does not create impacts to aquatic habitat or water quality and can be located close to existing transmission facilities which make it virtually benign from an environmental standpoint."

On April 26, 2021, paperwork was submitted by Minnesota based Nelson Energy to the Federal Energy Regulatory Commission (FERC), for a proposed hydroelectric project on the Llano River.

The proposed plan is to build a unique, hydroelectric storage facility, that would include a 3,500 acre-foot above ground "upper reservoir" and a 3,500 acre-foot below ground "lower reservoir," located about 2 miles east of the city of Llano.  Tunnel boring machines would be used to excavate the 8, 115,000 foot long tunnels associated with this project.  Along with the underground tunnels, an additional 50 foot high reservoir would be built above ground.

Projects like this have been proposed over the last 50 years, but mostly due to high-costs, none have ever been constructed.

In response to the winter storms of 2021 that knocked out power for millions of residents here in Texas, the goal of this hydroelectric project would be to provide a reliable energy source for local residents.  Generating an estimated  annual output of 1,450 gigawatt-hours of electricity to local residents, the proposal could help in situations like this.

However, aspects of the project do worry some local residents, much of which centered around the short, nine-day public comment period and the fast pace at which this project seems to be moving.

Other concerns seemed to be focused on the potential, unknown ecological impacts that this project could cause.  The Llano River eventually merges with the Colorado River, and flows on down to the Texas coast.  The flow of the river, and the impact that the use of this water could have along the 660 mile stretch of river is unknown at this time.

Dams have also been shown to have a negative impact on native fish populations.  They can block fish migration routes, reduce water quality by altering the flow of sediments in the river, and increase populations of invasive plants and animals.  In studies, dams have been shown to reduce local, native fish populations, including species like redhorse and different species of black bass.  However, the impact this proposed project would have on the Guadalupe Bass (a favorite target species in the Llano River) is unclear until environmental studies of this project are completed.

Texas Freshwater Fly Fishing will keep an eye on this proposed project and pass this information along to you.