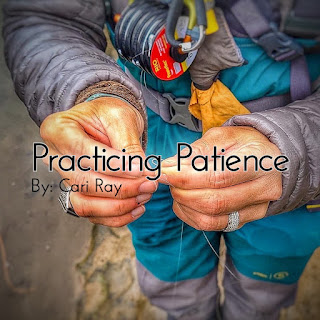 by: Cari Ray (Fisher of Zen)
It was the knot-tying portion of one of my beginner workshops. I think it was Lefty’s Loop in this case. I demonstrate each step of the knot and wait until everyone else completes it before moving to the next. All but one student was with me, and as she struggled and restarted the step several times her frustration was palpable.
As I always do, I had told the class that I had pretty much a bottomless pit of patience on their behalf, so it wasn’t me she was worried about. It was her own lack of patience with herself that she was wrestling with…along with likely other internal messages she was making up about being the last to complete it and pondering what everyone must think about her.
“Hey,” I said gently, “Look at me. Now breathe with me. That’s right. We’re not in a hurry here. We’re all sitting under a shade tree next to a crystal clear lake on a beautiful Spring afternoon in Texas with nothing on the agenda but being here. Now, let’s go through that step together. Slowly.” In that very moment I watched her shoulders drop, her eyes soften, and the redness in her cheeks begin to
fade.
I had someone tell me the other day that they didn’t have the patience for fly fishing. I say that sounds like as good a reason as any to take it up.
continue to Part 3 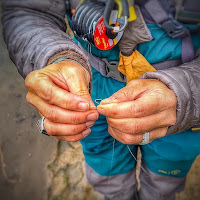 Cari Ray has worn many hats. Her primary vocation for years was as a performing singer/songwriter touring nationally solo and with percussionist, Dionne Ward, as “Cari Ray & The Shaky Legs.” While no longer her sole focus, music is still happening. More info on that can be found over at cariray.com.
You can add to that resume graphic designer, creative director, successful entrepreneur, marketing/business consultant, photographer and writer. If there isn’t a guitar in her hand, there’s likely a fly rod. She lives in the Texas Hill Country just west of Austin. And while Hill Country Rivers are her home waters, she can often be found traveling the contiguous US hiking into backcountry parts unknown to chase wild, native fish on the fly. And then telling the tale right here on Fisher of Zen.
You can find more from Cari Ray at fisherofzen.com