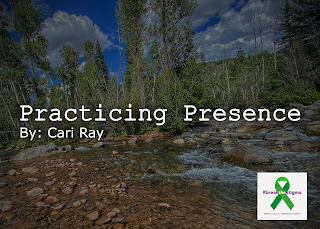 by: Cari Ray (Fisher of Zen)
As I approach the river, my mind is filled with all of the usual noise. Annoyance about the bill I left unpaid on the counter before I headed out this morning. The three emails waiting in my inbox waiting for a response. The self-judgement about often being terrible at follow through. The big question about what I’m going to do with myself now that traveling the country playing songs is no longer the viable career it once was. Chuckling a bit at the idea that it was ever a truly viable career. 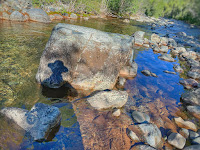 About this time I reach a spot that requires a crossing. It’s mid summer in the high country of Southwestern Colorado and, against better judgment, I’m wetwading rather than enduring the bulk of waders for a hike in to the backcountry. As I make the first step into flow, mind still an echoing cacophony, the icy stab of water as it soaks quickly through my wading socks demands my attention… all of it. In this moment, there is no more room for the noise, only the singular focus, the shock of cold on hike-heated toes.

This is just one snapshot of albums full of mental polaroids depicting moments where the pursuit of fly fishing has practically slammed me into the present. I believe the path to inner peace is paved with presence. And getting grounded in the moment is a pretty good start. I believe one of the best ways to get grounded is to put your feet in a river. To connect with all that is around you. To
notice the beauty, the ruin, and to allow yourself to feel a part of it.
(continue to Part 2)
Cari Ray has worn many hats. Her primary vocation for years was as a performing singer/songwriter touring nationally solo and with percussionist, Dionne Ward, as “Cari Ray & The Shaky Legs.” While no longer her sole focus, music is still happening. More info on that can be found over at cariray.com.
You can add to that resume graphic designer, creative director, successful entrepreneur, marketing/business consultant, photographer and writer. If there isn’t a guitar in her hand, there’s likely a fly rod. She lives in the Texas Hill Country just west of Austin. And while Hill Country Rivers are her home waters, she can often be found traveling the contiguous US hiking into backcountry parts unknown to chase wild, native fish on the fly. And then telling the tale right here on Fisher of Zen.
You can find more from Cari Ray at fisherofzen.com