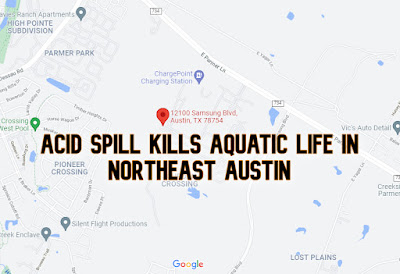 Some of y'all may have already heard about this, but if you haven't, here you go.  I do not know anyone that fishes around here, so it's impact on fly fishing my be negligible (not that it should happen at all.)  However, with two spills in a year, a larger, more impactful leak may be looming in the future.

The acid leaked from a pipe into a storm-water pond located at the facility and appears to have been caused "by an electrical arc from a control panel failure and power loss to water process pumps."  The leak allowed up to 763,000 gallons of the sulfuric acid enter the pond for up to 106 days.

Heavy rains allowed the waste from the pond to enter into an unnamed tributary of Harris Branch Creek. In a Memorandum from the Assistant Director of the Watershed Protection Department to the City of Austin, dated January 27, 2022, it was stated that

"Environmental scientists found remains of dead aquatic species; and virtually no surviving aquatic life within the affected stretch, including vertebrates (fish) and macro-invertebrates. This indicates the discharge had a significant short-term impact on the aquatic community and the ecology of the tributary. It is too early to know what the longterm impacts might be."

Samsung did hire a cleanup specialist after discovering the leak, but the question remains as to why it took over 100 days to discover the leak and get it stopped.

This is not the only chemical spill that this Samsung facility has had in the last year.  In May of 2021, sulfuric and hydrofluoric acid were both found to have leaked, but Samsung claims that only a very small diluted amount escaped offsite and had no environmental impact.  Samsung was not fined for this May 2021 spill.

If you have any information or thoughts, please feel free to leave a comment on this post or email texasfreshwaterflyfishing@gmail.com.

Other Articles You Will Love: