Bowfishing is Not Fishing (and Needs More Regulation) 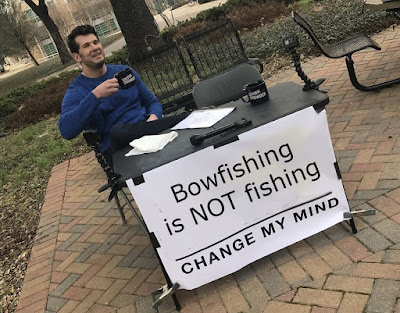 (psst...this is an Op-ed, that means Opposite the Editorial, it is an opinion of the author that is designed to generate discussion.)

Contrary to popular belief, Bowfishing is not fishing.  It is hunting fish with a bow.  There is no act of casting or an attempt to deceive the a fish into biting a fly, lure, or bait.  You are not even "catching" a fish in a net.  You are shooting it.  That is truth, but you can try to change my mind.

Merriam-Webster defines fishing as: 1) the sport or business of catching fish

Bow(fishing) hunting for fish is not "catching" fish.  It is shooting fish.  Shooting is hunting.  In hunting, when you "catch" an animal, you typically call that trapping, not hunting.  Am I right?

My issues with bow hunting for fish come when fish are indiscriminately killed (many native species are killed by bow"fishers" thinking that they are killing carp), and all too often, the fish are shot simply to kill the animal and then left for dead on the banks.  Killing of any native wildlife should be for consumption in some form (food, fertilizer, catfish bait, or something.)  Killing of non-invasive, usually native, fish, in the name of creating better fishing, is just wrong, and ignorant.

I (usually) take no issue with harvesting fish, by whatever legal means, if the fish is going to be consumed, and done so in a responsible way.  And, in the name of conservation, protecting our waters, etc, I am also in favor of removing invasive and/or detrimental species.  But shooting a fish and just throwing it back in the water or on the bank is wrong, and immature.

There are a multitude of bow"fishing" sites out there.  Some, like Loxley Bowfishing, attempt to promote the activity and communicate to bow"fishers" how to address their critics.  In one article, Loxley address "not eating the fish" as their second biggest issue.  Here is an excerpt from the article:

Those fish that are not eaten are typically invasive species where hunting them helps the ecosystem. They are hard to prepare, not good to eat, and the DNR might down right tell you not too...The most popular fish to shoot here (Common Carp) is labeled as “Do not eat” in most bodies of water, as they eat everything in their path, even if it is full of chemicals.

As you can clearly read for yourself.  The biggest issue is addressed, but not solved here. They state,

"Those fish that are not eaten are typically invasive species where hunting them helps the ecosystem...The most popular fish to shoot here (Common Carp)..."

This statement admits that non-invasive species are shot, and not used.  And, it does nothing to address the high numbers of fish NOT invasive species that are shot.  Then they go on to say, the most popular fish to shoot is the Common Carp, which is NOT invasive according to Texas Parks and Wildlife.  I am not saying that Common Carp should never be bow"fished," but I am saying that they should follow their own advise listed on "REASON #5: WE SHOOT TOO MANY FISH," which states:

"Consider what fish you are targeting. If they are popular game fish in your area, and not invasive, don’t overfish. They may be legal to shoot, but bowfishing in moderation keeps them around for you and others to catch later."

(Moderation and bow"fishing" are not two words you hear together often.)

Common Carp are increasing in angling popularity (both on conventional and fly tackle) at the same time that bow"fishing" is gaining popularity.  So, there is bound to be some conflict.  Common sense and respect for others is needed in these situations.

It has been shown that the Common Carp does not destroy the environment.  There are places where the Common Carp population is high (usually due to problems created by man) and it would not hurt to remove some (or even most of) fish from these populations.  Since it is legal and you are not hurting the population by bow hunting these fish, go ahead and do your thing, as respectfully as possible.  However, in a smaller stretch of water, taking 3, 4, 10, or more, fish out each time you (and everyone else) goes bow"fishing," can destroy a population of fish in no time.

This problem can be even greater with slower growing species of fish such as some species of gar.

In attempting to justify bowhunting for fish, Loxley Bowfishing also brings up another issue, bow"fishers" shoot fish they shouldn't.  And they do!  Here is what Loxley says (and I will put my favorite quotes in bold):

"It can be easy for people who only fish with rods and reels to believe their rules apply to bowfishing as well. They assume that catch and release is a necessary aspect of fishing, as you sometimes catch the wrong species or too small of a fish. This isn’t the case with bowfishing for a multitude of reasons, but more specifically because of the way that we fish and the species we target.

When bowfishing, we decide what to shoot, which means we control what we catch. We can see which species we are shooting and their size.

It is possible for the wrong fish to be taken when bowfishing, but it is rare. Experienced archer anglers know what they are shooting at and seldom shoot the wrong species of fish."

Anyway, lets bring this full circle.  I am not against bow hunting for fish.  I am for further regulations on bow"fishing," and a change in the attitude of many bow"fishermen."

Bow hunting fish can help control the populations of invasive and destructive fish, such as many Asian Carp species and species like Plecostomus.  There are plenty of other invasive fish that need to be removed from our waters.  I am also not opposed to bow hunting for Common Carp, as long as there are regulations placed on this (specifically by water body.)

I am opposed to the limitless killing of native species of fish that are vital to the health of our waters.  Different species of Buffalo and Gar are prime examples of this, and studies need to be done to determine bow"fishings" impact on these fish populations.  If you don't think many of these fish are being shot, just do a quick Facebook search for Texas bowfishing groups, or go to YouTube, and you will quickly see.

I know that there surely are some bow"fishermen" out there that respect the environment and think about the lasting impacts of their actions, but to be honest, most (if not all) of the bow"fishermen" I have come across are selfish and have the attitude of, "I'm gonna get mine, and screw the rest of you.  And because you tried to tell me I am wrong, screw you again, I'm gonna shoot all the fish, do nothing with them, and make sure you see it!"

If you are a bow hunter of fish, and you want your sport to hang around, you better take a long look in the mirror and think about the impact your actions (and the actions of other bow"fishermen") are having on the waters that you enjoy. Do you think about the long term impact of your actions?   Are you just shooting fish just for the "thrill of the kill?"

Maybe there is no direct threat to the overall populations of Buffalo or Gar in Texas right now.  And that tends to be what TPWD focuses on, overall numbers.  But maybe there is in your stretch of river.  For the same reason I would argue against keeping a bunch of bass or catfish from a small stretch of river, I would argue against bow hunting for Buffalo and Carp on that stretch.

If bow"fishermen" want to be a part of the conservation conversation (which they try to be when they claim that they are removing invasive species), then they need to be a little more far-sighted, not so selfish, and less in your face about about everything.

All that being said, bow(fishing) hunting for fish is legal in Texas, and across most of the United States.  The state of Texas does place some limited regulations on bow"fishing," and requires those over the age of 17 to have a fishing license (not a hunting license) to bow hunt for fish.  (To see TPWDs regulations on bow(fishing) hunting for fish, click HERE.)

Bow hunting for fish as a means of harvesting fish, can and should be debated.  Debate leads to progress.  Progress leads to a better world overall.  Bow hunting fish, just like keeping fish captured by any legal means, should be managed differently from waterbody to waterbody.  The state of Texas does not typically do this, so if you are going to bow hunt for fish, use common sense and do not deplete the resources in that body of water (yes, even if what you are shooting is not what you fish for, many others do...I promise.)

And if you do decide to bow"fish", make sure you know what you are shooting, and the impact that you are having on the environment, the fish, and the fishing in that body of water.

Carp in Texas
Two Flies and an Old Stretch of River
Fish Spotlight: Guadalupe Bass
To Glass or Not to Glass?
Bowfishing Buffalo Carp Gar