What Makes a Native Fish Trash? 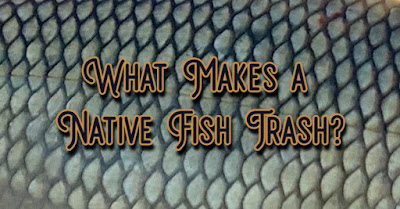 Typically in my life fish have been placed into one of two categories, game-fish or trash-fish.  Everyone loves the game-fish, nobody wanted the trash-fish.

Trash-fish have taken on many other nicknames and it seems the vernacular tends to be regionalized throughout the United States.  Trash, rough, dirt, and coarse, are all examples of what these fish have become known as.  When I was younger, the names of these fish never meant much to me.  Heck, they were all trash in my opinion.  With them in the water it was probably hurting the bass populations (or so I thought.)

Now, don't get me wrong, the Guadalupe Bass is still my favorite species to target. But, within the last couple years as I have started fishing for different species with my fly rod, I have looked at these "trash-fish" through a different lens.  I now realize several things: these fish are not "trash," there are way more species of fish in the waters I (thought I) loved, these fish (invasive species excluded) are vital to the health of our ecosystems, and they can be real trophies to target and catch.

How and why did we start considering some of these species of fish to be trash, while other species were qualified as game that deserved protection?  I had always assumed it was because these so called trash fish were inedible, or at least that is what I was told.  But that is not really the story.  The answer is more complex, and definitely more sad, than I ever considered.

As described in a couple articles recently published (Cultural Biases Impact Native Fish, Too and Goodbye to “Rough Fish”: Paradigm Shift in the Conservation of Native Fishes) this division amongst fish was culturally driven, with white males (of European decent) determining which fish were to be valued.  The species that they typically valued were Trout, Salmon, and Bass, so these became the fish that were considered "game-fish" and therefor protected by the States.

Most other species received little to no protection at all.  In several cases, attempts were made to wipe out some of these "trash" species from certain waters, often in an attempt to improve angling opportunities for the game-fish species, and further perpetuating the ideas that these fish had little-to-no value; you know, they were "trash."  No real thought was given to the potential food value, the impact on the ecosystem, or the cultural significance that these fish had for other underrepresented groups of people (Blacks, Hispanics, Indigenous.)  Many of these species had great food value and had sustained different groups of people for years.

As Fish and Wildlife departments, still run by the same white, male demographic, continued to expand and protect a few different species of fish, the species they protected continued to be these same "game-fish."  This protection continues to perpetuate the idea that some species where simply more valuable than others.

At the same time, game fish populations have been studied at a rate 11 times that of other, non-game species of fish.  Today, with the sudden growth in popularity of methods of fishing like "bowfishing," the native species like gar, buffalo, and suckers, have all been impacted.  Studies need to be done to determine if the current rate that we are killing these native species at can be (or should) be sustained.

So what makes these fish trash?  Simply put, the long held, and continually perpetuated, belief that trout, bass, and salmon, are superior to other freshwater species.

Again, don't get me wrong.  I love to fly fish for bass, and protection of these fish does need to occur.  But, these other native fish are not trash.  They are not rough, dirt, or coarse.  Gar do not decimate bass populations, they have thrived together for millennia before modern American's began fishing for them.  Buffalo and suckers are not "carp," they are not invasive, and they do not ruin the water quality.  They are vital cogs in the ecosystem that sustains the fish they most people want to target, and therefor should be celebrated and protected.

Other Articles You Will Love: