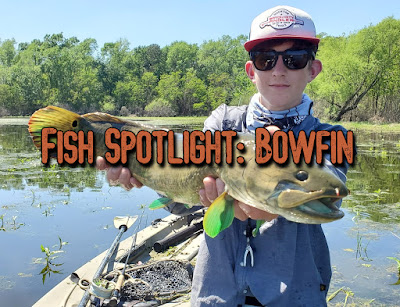 Known by a nearly a million names, the Bowfin may be considered a "trash-fish" by many, but their native existence in Texas is just about as cool as any other species here, and they deserve some respect!

I must admit, I have never fished for Bowfin, nor have I been around while someone else has landed one.  And, I knew very little about these fish before I started researching them for this Fish Spotlight.  But I genuinely now think that these are some of the coolest fish here in Texas, and I will dedicate some time to target Bowfin in the future.

Much of my research included information from Dr. Solomon David and a few dedicated Bowfin fly anglers, including Stavros Cotsoradis (the current Texas fly fishing record holder) and the Bowfin man himself, Danny Scarborough from Houston Fly Fishing Guide Services.

Bowfin are also called Beaverfish, Blackfish, Choupic, Choupique, Cypress Trout, Dogfish, Ginnel, Grindle, Mud Fish, and more, Bowfin get called a million different things in different regions of the United Stated.  The Bowfin (Amia calva) is a distant relative of gar, the last remaining member of its family, and a remnant of the Jurassic Period (yes, that period in time that had dinosaurs.)
***Insider info from an unnamed source: There may actually be two or three separate Bowfin species in the near future.  You heard it here first!***
Bowfin are fairly easy to distinguish from other fish that inhabit their waters.  They have large, scale-less heads, with a large mouth containing many sharp teeth.  There is a barbell-like flap near each nostril.  Bowfin are a most often a dark olive greenish color on their back, with the color lightening to a lighter green or cream on the belly.  They can however, turn a brilliant green, turquoise, and/or yellow, coloration during the spawn.
Containing more than 45 dorsal rays, their dark green dorsal fin runs more than half the length of their back, and has no spines.  The length allows the fish to swim backwards with relative ease.  All other fins are usually a lighter shade of green.  Their tail is rounded, and there is often a dark spot near it.  This spot will fade as the fish ages, especially in females.
They are typically caught in the 6-8 pound range (on conventional tackle), but can reach sizes of over 20 lbs and more than 36 inches long. The Texas state record for the Bowfin stands at 17.65 pounds and 36.5 inches long.  It was caught in 1993, on Lake Fork, by Brenda Walsh.  The Texas fly fishing record for Bowfin is 7.75 pounds, 28 inches long, and was caught on a "meat whistle" by TFFF member, Stavros Cotsoradis, in 2019 on Lake Conroe. Here is the story of that fish:

"I was fishing with Danny Scarborough in a south Texas lake, creeping down a bank in a swampy backwater. We spotted a bluegill being pulled around by something, and after a closer look saw it was a giant bowfin trying to choke down a large bluegill. We hopped out of the kayaks and followed it around on foot then plopped the fly in his face as soon as he spit out the bluegill. A few twitches and he slammed the fly. After a quick 2 min fight we had him in the net and right after he was netted the hook popped out."

Bowfin are predatory fish.  The typical diet of Bowfin, once they reach 4 inches in length, consists mostly of smaller fish. They will also regularly consume other prey, including crayfish and frogs, and have been known to eat insects, shrimp, crabs, and more.
Bowfin tend to move through the water column throughout the day.  Typically, they can be found in deeper water when the sun is high, but they will move to shallower water to feed (especially at night.)  They tend to prefer swampy, weedy backwaters, lagoons, and oxbows with good water clarity, and usually avoid water with much current.  They can tolerate silty, muddy waters, but are also found in crystal clear water. Bowfin can even thrive in lower-oxygenated waters than many other fish species, thanks to their ability to use their swim bladder as a lung.  They will swim to the surface and gulp in air to replenish this air supply.
Bowfin spawn in late spring.  Males build nests in shallow, weedy areas, clearing out loose material and leaving "harder" things like gravel, roots, and sticks, for the females eggs to stick to.  Once the female lays the eggs, the male will guard the eggs and then guard the fry for about another nine days after hatching.

With the exception of most of Appalachia, Bowfin are native to most of the Eastern portions of the United States.  In Texas, populations of Bowfin can be found in the Red River, San Jacinto River, and Sabine River systems, as well as the lower stretches of the Brazos and Colorado Rivers.  Lake Conroe, Lake Fork and Lake Tawakoni, are all productive Bowfin lakes here in Texas.
Historically, Bowfin have had large populations throughout this range.  However, due in large part to habitat loss and in smaller part to misunderstanding of these fish, their numbers may have decreased some (yet not as much as gar,) but that is unclear.
In talking to Dr. Solomon David (Nichols State University, #GarLab), we just don't know enough about the populations/numbers of these fish to determine if and how threatened Bowfin really are.  Being considered "trash fish," for so long, there just haven't been enough studies to determine the real health of the population of bowfin.  One thing is certain though, a healthy Bowfin population means healthy water, and a Bowfin population that disappears could mean trouble.

Bowfin are known as excellent fighters, and that, along with their ancient, dinosaur-like appearance, is part of what makes them appealing to catch.  But that is also part of what also makes them difficult to land.  Their hard, boney mouths make setting a hook difficult, and their numerous sharp teeth inside a powerful jaw make keeping the fish on the line a challenge. 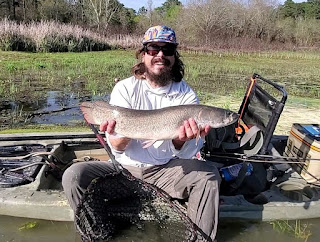 Your typical fly fishing set up for Bowfin should be an 8-weight rod, with 0x fluorocarbon leader and tippet.  That will give you your best shot at driving the hook home and keeping the fish on the line as it swims toward heavy cover.  Make sure you are using a fly with a strong, sharp hook as well.  Be ready for a fight, as bowfin are known to hit and run hard straight to cover or at you.  Expect some spinning, twisting, and jumping, as well.
Since they move into shallow waters to eat, when targeting Bowfin on the fly, sight fishing for these dinosaurs in good clarity water is probably your best bet.  Look for them in shallow, weed filled (a must) areas.
According to Scarborough, in the spring, you will often find them spawning in the same areas that bass are spawning, and this is the best time to find large cruising females and brightly colored males as well.  In the heat of the summer, target the fish that come to the surface and gulp air. The fall is similar to the summer, but shad become a larger source of food.  The winter is the most difficult time to target Bowfin, but it is still not impossible.
You must also remember that they rely on their sense of smell more than their eyesight when finding food, so don't go rubbing your sunscreen and bug spray all over your flies and line.  And by the same token, slow down and put your fly right on their nose.  They are not usually out actively searching for prey, they are sitting back in the weeds and waiting to ambush something swimming right by their nose.  Sometimes you have to keep your fly in their face for a while in order to agitate them enough into biting.
There are several flies that people have found successful in their pursuit of Bowfin.  Different Crawfish patterns (like the Crawfish Bite and Meat Whistles) in oranges, olives, and black.  Baitfish patterns such as EP Baitfish and Micro Game Changers can also be successful.

Though they may still be considered to be "trash fish" by some, Bowfin are definitely not trash and are a worthy target and advisory for any fly angler.  So, if you find yourself in East Texas, or almost anywhere in the eastern United States, dedicate some time to fishing for some of these ancient monsters. 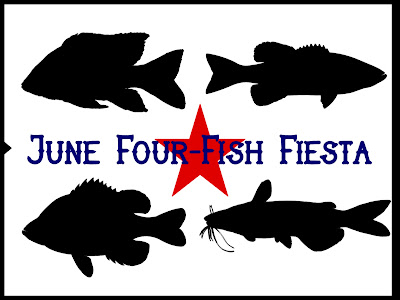 June is my birthday month, wooo-whooo!  So to celebrate, Texas Freshwater Fly Fishing will host the June Four-Fish Fiesta , an online Texas Fly Fishing tournament. Rules You must register for this event.   You can register by signing up for just this June Four-Fish Fiesta, purchasing a full  2022 Membership to Texas Freshwater Fly Fishing , or by signing up with one of the other  Membership Options .  Registration for this even will close June 15th, 2022. There will be four (4) categories of fish that you can earn points in.  Each category will have its own points system/allotment. Black Bass Panfish Trash Other Each category will have its own winner, and an overall winner will be crowned with totals from all four categories. Fish must be handled and photographed with care. Fish must not be foul-hooked, and must appear to be uninjured from the "catch and fight."  Any fish submission that shows clear signs of harm (bleeding from the gills, covered in dirt or laying on the grou

Considered a nuisance fish by most anglers in America, carp in Texas seem to be as divisive a topic as the Dallas Cowboys, the legalization of marijuana, or Kinky Freidman.  Some love them, many hate them.  Discussions about carp can quickly become as heated of a debate as one about UT vs A&M, putting sauce on Bar-B-Que (notice the spelling), or wind turbines.  As carp fishing (especially fly fishing) becomes increasingly popular in Texas, this divisiveness may get further entrenched.  All sides of the carp debate feel solidly correct, but what is the truth...are they trash fish, do they destroy the environment, are they a prize catch? What are these carp in Texas and what is their impact?   In this five-part series, Texas Freshwater Fly Fishing , will attempt to dive deeply into the subject to root out as much CORRECT information as possible.   Be sure to understand the facts before you make a decision.