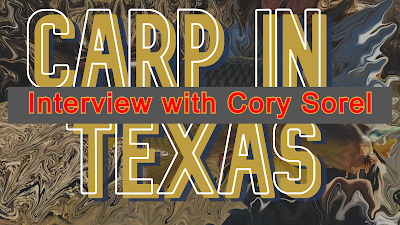 In the 5th(ish) part of Texas Freshwater Fly Fishing's series, Carp in Texas, Pat Kellner interviewed (virtually) a few expert carp fly fishermen in the state, to pick their brains and see if they could share some information to help you catch a few Carp in Texas.
Here is Pat's interview with Cory Sorel:
Pat: What is it about catching Carp that keeps you targeting them?
Cory: "The stalk. I equate it to bow hunting for deer frequently. The required stealth and patience, usually only getting one shot in a small window, makes for a super rewarding experience when it all comes together. Carp are also still the only species to have actually put me in my backing, and they do it consistently. They're strong and fight hard and keep you on your toes. There's something, too, about sight-fishing, being able to see the fish feeding and deciding to pick your fly up. Beats casting blindly any day."
Pat: Have you caught any species of Carp other than a common carp (including any of its variations like Koi or Mirror)?
Cory: "I've caught about 7 koi. One I've caught three separate times. I've only gotten one mirror, a little guy on the Pedernales. The mirrors seem to have some magic about them, they feel smarter and more discerning. One in particular has beaten me twice."
Pat: Do you ever target, or have you ever targeted, any species other than the common carp?
Cory: "Carp are definitely my main target, but I do go out for black bass on occasion, especially during hairbug and popper season. Every once in a while I'll break out the 2wt and have a good time with sunnies and a dry fly. I try to make it out to the coast at least twice a year for redfish and speckled trout. Redfish are just turbo-carp. I'm originally from the northeast, so when I'm visiting home I'll put some time in chasing rainbows, brookies and browns."
Pat: Speaking of seasons, it there a time of year that is most productive to target carp?
Cory: "Summer and early fall have been my most productive times. They're out and about in the spring but spawning activity tends to distract them. Winter is far and away the hardest as they seem to get extra wary and even pickier about what they eat."
Pat: Describe the type of water of water where you typically find carp?
Cory: "I fish rivers almost exclusively. You can find evidence of them in some deep holes, but I generally don't cast at fish I can't see. That means about 4ft deep to a few inches. Clean to turbid water, most often in slack and slow water. Occasionally, and these are some of my favorite catches, you'll find carp pretending they're trout, sitting in some shallow current. If you can get a good shot to them, they'll usually eat a little more willingly."
Pat: What does your typical carp fly fishing set-up consist of?
Cory: "I fish either a 9' 6wt fast graphite (Orvis Recon) or 8' 7/8wt fast glass (Pelagos O'io) with a WF floating line. My Orvis Hydros 3 has a spool for each. My leader recipe never changes: I start with a 2X nylon leader, trim 18-20" and replace it with 2-3X fluoro. It gives a little stretch for cushioning the initial take and run, but gets the sink and slightly better invisibility of fluoro."
Pat: What would you consider your top 3 carp flies?
Cory: "Lance Egan's Headstand, John 'Montana' Bartlett's Hybrid, and my own Hackle Naiad."
Pat: Any other details about your presentation, tactics, that you could give someone someone trying to target carp for the first time?
Cory: "My biggest pieces of advice are always stealth and patience. You can't catch them on the fly if you can't see them. If you're not seeing them, you're more than likely scaring them. A big part of that is not fishing for bass or sunnies or anything else. All that casting around will drive them off. Patience is key, because often you can wait 'til they move to a better position to be cast to or you'll notice another fish nearby that may be an easier shot. Either way, you most likely only have one or two presentations, so taking a breath and observing for a bit will always up your success. Other than that, master the roll cast. It's the best presenting cast and very useful for a lot of carpy environments."
Pat: What negative things have you heard about carp in Texas?
Cory: "Mostly hear about their being 'trash fish' and that 'they eat bass eggs'. Nearly every other species does too, and bass will cannibalize, but TX is somehow still a trophy bass state. I've heard them confused with grass carp as destroyers of aquatic vegetation."
Pat: Have you ever seen any negative impacts of carp on the natural freshwater systems here in Texas?
Cory: "I've been fishing around Austin about 6 years now and have seen more negative impacts from human activity and negligence than ANY species of animal, save zebra mussels. No stream or lake that I fish on a regular basis seems to have been damaged by common carp in any way."
Pat: Thank you so much for your time and willingness to share for this project.
Be sure to check out Cory Sorel at Sorel Fly Fishing and on Instagram @sorel.fly
Do you enjoy Texas Freshwater Fly Fishing?  If so, you can support TFFF by making purchases at Flydrology.com  Your support helps keep Texas Freshwater Fly Fishing up and running, with quality content and a great Facebook group!
Other articles you will LOVE:
Carp in Texas: Part 4(ish) - Interview with Gabe Cross
Fish Spotlight: Guadalupe Bass
How to tie the Crawfish Bite
Suburban Escape
Carp in Texas Common Carp Corey Sorel Koi Mirror Carp