Texas Parks and Wildlife has just announced via their Facebook account that Silver Carp have just been found in the Red River, 15 miles downstream from Lake Texoma. 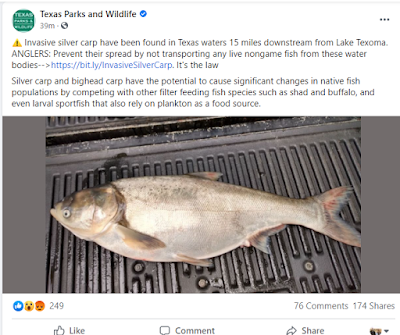 Silver Carp, like their relatives the Bighead Carp (already found in the same area) are potentially a significant threat to native species of plants and fish populations in the areas that they are found.

I encourage you to read more about Silver Carp and more in the series Carp in Texas, here on Texas Freshwater Fly Fishing.

Help prevent the spread of invasive aquatic species by: