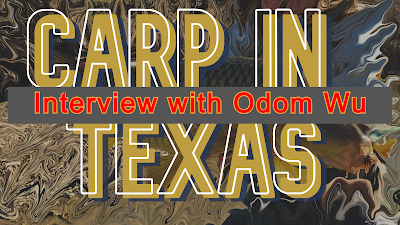 In the 6th(ish) part of Texas Freshwater Fly Fishing's series, Carp in Texas, Pat Kellner interviewed (virtually) a few expert carp fly fishermen in the state, to pick their brains and see if they could share some information to help you catch a few Carp in Texas.  Today's interview is with Odom Wu. 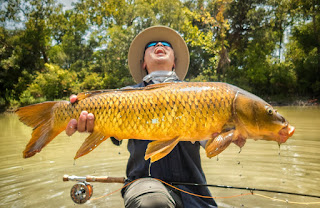 Here is Pat's interview with Odom Wu:
Pat: What is it about catching Carp that keeps you targeting them?
Odom: "I enjoyed the hunt and the challenge of enticing them with accuracy and a stealthy approach. It helps me to improve my game."
Pat: Have you caught any species of Carp other than a common carp (including any of its variations like Koi or Mirror)?
Odom: "Yes, mirror carp." 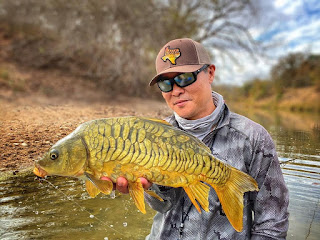 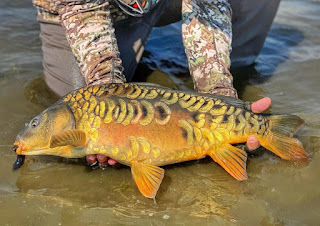 Pat: Describe the type of water of water where you typically find carp?
Odom: " I prefer to fish rivers with depths of a few feet to shallow waters."
Pat: Is there a time of year that is most productive to target carp?
Odom: "Spring to Fall is often the best. I also target them in the winter but it’s not optimal." 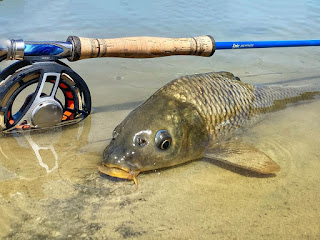 Pat: What does your typical carp fly fishing set-up consist of?
Odom: "My favorite carp gear is a 6wt Epic Swift fiberglass and 6wt Loop graphite paired with a Loop reel. My fly line is either a Cortland Bonefish or Scientific Anglers Amplitude floating line connected to a 9ft or 12ft fluorocarbon leader that I build."
Pat: What would you consider your top 3 carp flies?
Odom: "The Scarpion, Articulated Damsel, Hybrid, and a variant of some flies."
Pat: Any other details about your presentation, tactics, that you could give someone someone trying to target carp for the first time?
Odom: "A common mistake that newbies make is not allowing the carp to run at initial hookup. With their enormous inertia, you must allow them to take off with some drag (not fully locked down) and then subsequently play them harder to bring them into the net or you will snap the leader or fly." 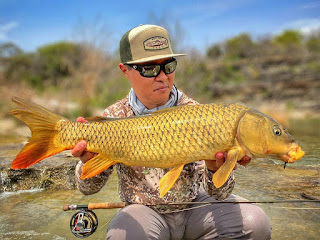 Pat: What negative things have you heard about carp in Texas?
Odom: "Some people consider them as a “rough” fish. Carp went from food fish to rough fish due to a lot of misconceptions. Carp has enormous status in Europe and Asia and is maintained by a lucrative industry. However, carp is slowly gaining popularity in North America and in some places, they are considered a “sports” fish. Catch one on the fly and then you will know their power. Some people bow “fish” for them. Personally, I think it takes little or no skills or talent to shoot something that is 4 ft away from you. The worst part of “bow fishing” is that often people shoot and mistakenly kill Buffalo fish as carp. Lastly, the worst of the worst is to witness the horrible waste of fish to be shot and thrown on the banks, left to die and rot in waste." 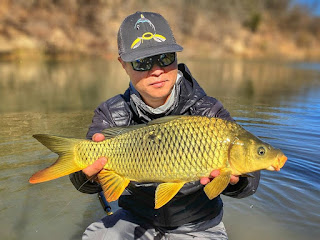 Pat: Thank you so much for your time and willingness to share for this project.
Be sure to check out Odom Wu on Instagram @odomonthefly
Do you enjoy Texas Freshwater Fly Fishing?  If so, you can support TFFF by making purchases at Flydrology.com  Your support helps keep Texas Freshwater Fly Fishing up and running, with quality content and a great Facebook group!
Other articles you will LOVE:
Odom Wu
Carp in Texas: Part 4(ish) - Interview with Gabe Cross
How to tie the Crawfish Bite
Suburban Escape
Carp Carp in Texas Mirror Carp Odom Wu ommon Carp Scarpion