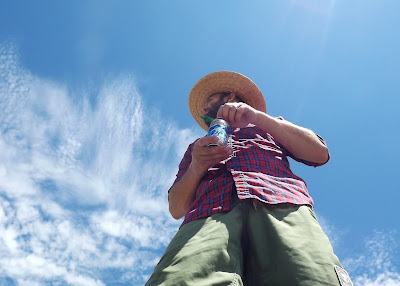 I have been arduously slaving over this article for months on end now.  I was forced to hit the water, occasionally under the searing Texas sun, sometimes with the west Texas stars overhead, and occasionally while the weather was changing and crisp air was settling in.  I was required to fish, with my compadres, and alone, on rivers I love.  Many times I was required to drink a beer or two while relaxing on a tranquil river bank; I even had to take a few sips with a rod in my hand.  All the time, I had to endure through some of the most difficult and agonizing research sessions ever!  I can’t stand Fish Tattoo (my old blog where this was posted).  I wish I never started it.

Ha…just kidding.  This was awesome! 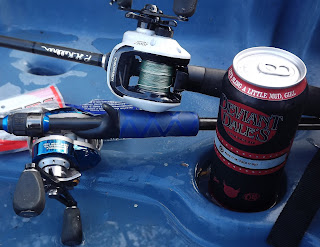 I mean, come on, what's better than a peaceful day of casting a line on the river, and drinking some first-class brews?  Pretty much, nothing.

I am not a fan of getting sloshed while fishing.  I don’t do it, and I don’t encourage you to either (in fact I highly recommend against it, not only will you catch less fish, but you are then putting your life at risk), but from time to time I do enjoy sipping on a couple good beers while I hunt some river bass.

I used a "complex" system of rating the beer based on taste (first and foremost) with extra points thrown in for factors that help protect the environment.  The only requirement for a beer to be considered was that it had to be available in a can.  And on a side note, although I have tasted many many many beers, I have not had the opportunity to taste every canned beer out there.  I have had even less opportunity to drink them while fishing on a river, and living in a tiny southwest Texas town makes getting my hands on a good beer difficult.  So...this article may become a regular, yearly post, as I am able to sample different beers from year to year.  Is this the first annual River Brew Seasonal Rankings?  If you have any thoughts or suggestions  please feel free to let me know!

Why a can? Well, first of all, most rivers do not allow you to bring glass.  That is a safety thing.  I know most of you are great stewards of the environment, and would never throw your empties into the river, but too many morons have ruined the rivers this way, and when they throw glass out, it breaks and leaves sharp pieces for you and your kiddos to cut themselves on.  Cans are also easier to recycle.  So, they help protect the environment on both ends.  But cans also offer a few other advantages.  First of all, cans can protect beer a little bit better from the light and oxygen, helping to keep your beer better a little bit longer. Canned beers also cool a little bit faster.  So, when you throw your beers into your ice, they will be good and cold when you are ready for refreshment.

Anyway, this week we will bring you the top five brews, for each season, to bring down the river while you fish.  Enjoy!