Facial hair and fishing have much in common.  To begin with, having hair on your face is manly and so is fishing.  Going fishing with while sporting a beard...even manlier.

The evolution of facial hair parallels the history of fishing.  It is very important to note that this is a very serious post.  It is not fun, it is educational.  Please don't laugh or smile as you read this.

As humans were beginning to spread out around the world, he began to encounter new species of fish that were begging to be caught, and species of man that had been catching them for years.  These amazing dudes would kill animals and catch fish to eat.  Their amazing facial hair may have been a result of their manliness, or possibly the source of their manliness.  Either way, it doesn't matter.  They would influence the humans to come.  In some areas of the world Neanderthals helped to show humans how to grow awesome beards and catch the native fish. 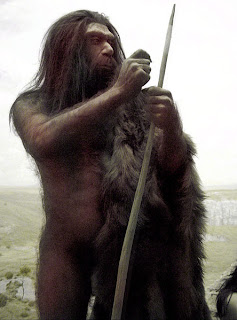 Neanderthals were eventually killed off and out spawned by man, but there legacy lives on.  In fact, science has shown that there is some Neanderthal DNA still surviving in modern day Humans.  No wonder some of us can still catch fish and grow great beards.  Pictured above, Uhggalla shows off his full face of hair and a hand made spear he built to catch his fish.  Uhggalla was the most sucessfull of all the Neanderthal anglers.

The Dawn of Civilization

The first civilization in history was also a group that sported bad-to-the-bone facial hair and could catch enough fish to feed the community in Mesopotamia.  They may have had some of the best beards in history.  Check out this picture of Gilgamesh: 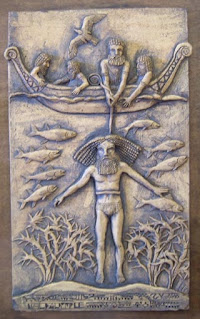 Living between the Tigris and Euphrates provided good river fishing for the Sumerians.  Possibly they were fishing from canoes or round boats or kayaks. But, probably it was the beard that helped them catch more fish.

Noah may have learned to fish from Gilgamesh.  He surely learned the secrets of great facial hair from Ole' Gilg. 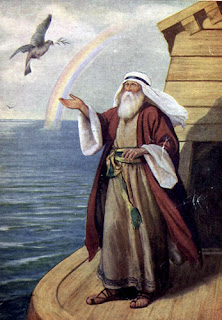 It's a good thing he learned to catch a few fish, with the whole world flooded, fish would have been an excellent source of protein.  And, imagine the beard that Noah had after 150 days on a boat.

Odysseus spent something like 10 years drifting at sea.  That is even longer than Noah did.  Crazy.  I am sure he grew a great beard during that time.  Sure, he spent some time with the ladies and fighting, but I bet much of his time was spent fishing with his buddies on board his ship. 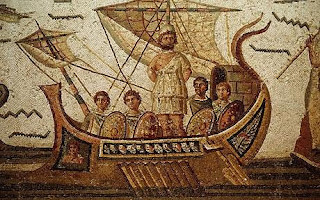 Notice Odysseus standing up, leading his men, and commanding great presence with his facial hair.  He was a fine fisherman and a fellow bearded brother.

Of Jesus' 12 disciples, at least 4 were fishermen, Peter and his brother Andrew, and James and his brother John.
Fish were an important food source around the Sea of Galilee.  Beards were customary for men in those times.  It is only fitting that Jesus would have chosen four bearded fishermen as disciples.

Marco Polo was one of the first world travelers.  Most historians are unaware that the reason for his journeys was to fish.  He loved to fish for and catch exotic species in their native waters.  He also had one of the best facial hair growings, spreading the popularity of the beard around the known world. Check out this mosaic of Marco, prominently displaying the beauty of his beard: 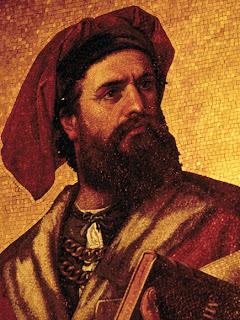 With stops in the Middle East, India, China, among others, Marco Polo was able to catch numerous species of fish in both fresh and saltwater. Some believe that Steve Wozniak was the first angler to catch 1000 species of fish, but that is simply untrue.  The true first to accomplish this feet was Mr. Polo himself.  A great bearded angler, Marco Polo never was a Fish Out Of Water!

After Christopher Columbus, there were several famous explores and conquistadors that traveled to the new world.  The greatest fisherman of these was Francisco Pizarro, and he had mighty fine facial hair to go along with those angling skills. 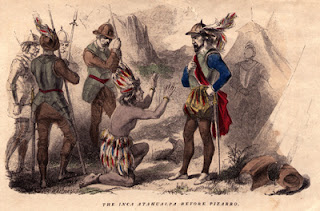 As seen in the picture above, even the Natives had a high regard for his ability to catch great fish at first.  Eventually he began to catch all their fish, turning the Native Peruvians against him.  But unfortunately, instead of respecting the native anglers, Pizarro decided to conquer them so that he could continue fishing.  Although he was not of the best character, he still makes this list due to his fishing prowess and beard.

Izaak Walton is best know for his work, The Complete Angler.  But he should also be known for his trademark facial hair. 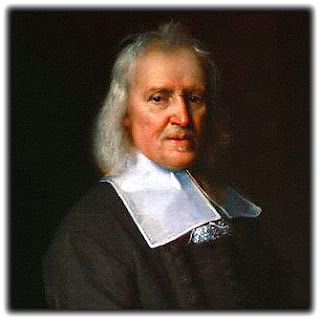 It was a unique mustache with a small tuft of hair growing under the lip, a sort of modified goatee, a style that is still popular today.  Izaak did dabble in fly fishing, although he never claimed to be an expert.  His expertise was in the area of live bait fishing.

One of the pioneers in the field of "Fish Culture," which went above and beyond just the hatching and rearing of fry.  Frank Buckland also "cultured" a great beard while promoting fishing thought England. 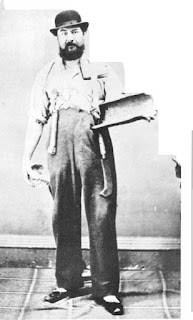 Frank Buckland dedicated his life to improving the commercial fisheries of the British Isles.  His legacy can still be seen today in the Buckland Foundation.

Charles Frederick holder was the "inventor" of Big-Game Fishing among other things.  He was a passionate angler who sported good looking facial hair. 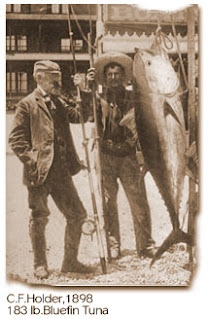 Charles is pictured in the photo above with what was then the world record Bluefin Tuna.  It is a good looking fish.

There is no question, Theodore Roosevelt was an accomplished outdoorsman and conservationist.  He also sported great facial hair with his trademark mustache.  Teddy is pictured below holding a giant trout.  Although the picture is borrowed from another blog (Roderick Hawg Brown), and I have serious doubts of it's authenticity, it is still cool. 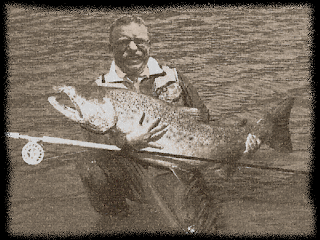 "Walk softly and carry a big stick."  That sure sounds like a fishing reference to me.

Although Leon Trotsky may have been a Marxist and the founder of the Red Army, he was still an avid angler with a knack for growing impressive facial hair. 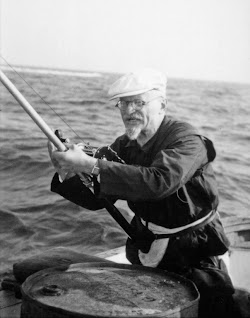 He is pictured above deep sea fishing in the Gulf of Mexico.  His trademark goatee is also on display in this picture. Trotsky, when not leading the communists and before his split from Joseph Stallin, was an avid ichthyologist.   In fact, it was a Rockfish, that lead to the final confrontation between Trotsky and Stalin.  Either way, Trotsky had much better facial hair.

Ernest Hemingway's facial hair changed from time to time.  Sometimes it was a mustache, sometimes it was a beard.  He was a journalist, author, and avid outdoorsman.  He enjoyed the pursuit of game, fishing often. Much of what is wrote was fishing stories. 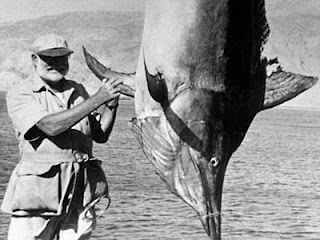 The Old Man and the Sea might be Hemingway's most famous fishing story, however he has written many more stories about fishing.  In 1960, Ernest met another bearded fishing lover, whether they were friends or not doesn't matter for this article, Fidel Castro.

The dictator and leader of the Cuban communist revolution, Fidel Castro is also a lover of fishing and has a pretty good beard. 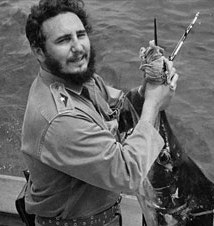 Castro is seen in the picture above with what looks like a version of Abraham Lincoln's chin strap beard.  Here, Fidel adds in a mustache to make it his own style while he is out on the water.

A true fishing legend, Flip has been casting a line in Florida for a few years now, and sporting a healthy beard for almost as long. 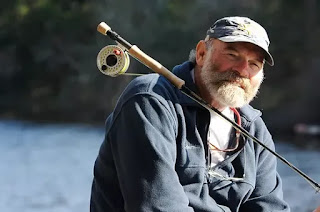 Flip's legacy and beard will continue well after his fishing days are over.  We should probably all strive to be a little more like Flip.

I don't know who is next, but there will be more.  Fishing and facial hair just go together.  Who do you think should be added to this list?
Other posts you might like:
The Lone Guad Hunter
Odum Wu
Tying the Clouser Minnow
Fish Spotlight: White Bass
facial hair funny 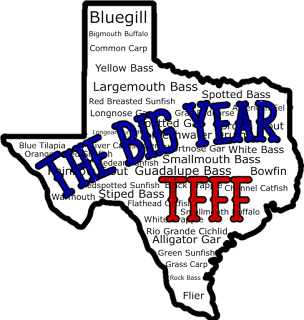