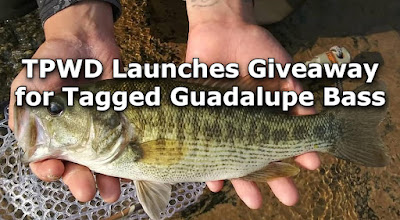 In a recent statement from their website, Texas Parks and Wildlife has announced that they will be partnering with All Water Guides and the Texas River School, to bring you a prize giveaway.
Thirty tagged Guadalupe Bass were released into the Colorado River at locations near Little Webberville Park and near the leased river access sites near Smithville.  An angler that catches one between February 4th and August 31st, "will be awarded a prize package and be entered into grand prize drawings at the end of the seven-month period."
Here is what the Texas Parks and Wildlife page says:

To find out more info: