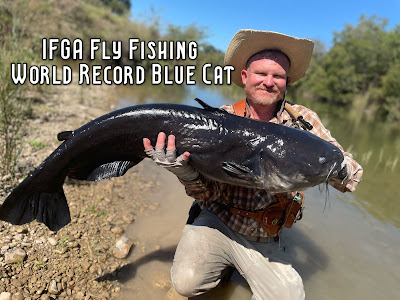 FREDERICKSBURG—A central Texas rancher out fly fishing with his son on the Pedernales River in mid-October landed a 31.5-lb., 40-inch-long blue catfish on a small (4 WT) fly rod. The fish was so big, it was just certified a world record by the International Game Fish Association (IGFA) for the 12-lb. tippet class fly rod world record blue cat.

In fly fishing, tippet refers to the last three feet or so of monofilament or fluorocarbon line used to attach the lure, or “fly,” to a bigger monofilament leader. The leader connects to the colorful nylon fishing line that people see on display when they see someone fly fishing. Ben Christensen, 46, was using a commercial monofilament “bass” tippet in 12-lb. test. 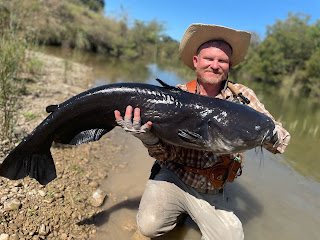 Christensen, a member of both the Texas Hill Country Fly Fishers Club of Fredericksburg and the Texas Backcountry Hunters and Anglers (BHA), is a 7th-generation Texan whose third great-grandfather, Abner Kuykendall, was the first Anglo settler of the Old 300 to come to Texas. Kuykendall arrived in Washington County in October of 1821, exactly 200 years before his descendant made the record catch.

“Catching this fish was a lot of fun,” Christensen explained. “He was on the surface of the Pedernales River, under the shade of some pecan trees, which is something that anyone who knows anything about catfish can see is uncharacteristic. He swallowed my size 6 creek damsel fly after about a half-dozen casts, and I was in for a serious fight.”

Using tactics he said he learned offshore and fishing from the granite jetties of South Padre Island and the Mansfield Cut, Christensen said he kept the fish’s head high and kept it from running into brush snags in the river. “I was trying to keep from breaking off at any of the three knots, or the middle of any of the leader or tippet, or even from breaking the rod,” Christensen said. He says he caught the fish in the Pedernales River, west of US Highway 83. 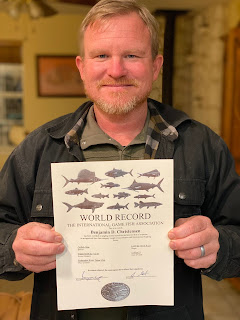 Christensen is currently writing a book for a small, independent publisher that publishes adventure travel guides, among other genres. His forthcoming book will be a guide to fishing the Texas Hill Country. It is slated to be published by in January, 2024. Christensen’s title is set to follow the award-winning “Fly Fishing Austin and Central Texas” by Aaron Reed, which won the National Outdoor Book Award for non-fiction adventure guide in 2021.

Christensen said he is also passionate about recreational river access for anglers.

“I have had plenty of trouble with landowners who acted like they owned some stretch of river, from the Llano to the Sabinal,” said Christensen. “I have been back and forth with TPWD about some of these incidents, but few people really understand Texas river access law, it seems. My goal is to help change that, best I can. It can get a little wild and wooly in some places, and the average Texan is hindered by limited recreational access in places where the state has the most beauty to offer.”

Christensen said he is vocal in his advocacy for recreational river access. He speaks to clubs, promoting fly fishing and recreational access everywhere he goes.

“Fredericksburg is a fly fishing town that doesn’t really know it yet. The Pedernales fishes well, and fly fishing for species other than trout is starting to catch on in Texas. This is good, seeing as how Texas has no native trout.”